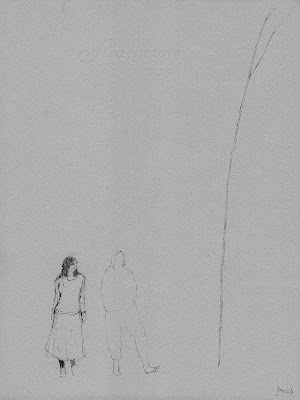 Temple--sien in Castellano, perhaps from the German, influenced by sentir--to feel.

Story from Atahualpa Yupanqui. In the quebradas of Salta--the arid backcountry slopes of the Andes Cordillera . A German mining engineer, rough sort, living out of a tent--in which he has installed an old upright piano. Enjoys inviting up the locals for an evening of food, comraderie--in which he launches into vintage renditions of Wagner. Then Don Atahualpa, with his zambas and vidalitas--todo lo criollo. A Salteño, worked up by spirit of the latter, and having downed a fair amount of Argentine wine, appears suddenly with a large revolver, pointing the barrel directly at the German's head--at his temple... No one moves. But slowly an older criollo appoaches, "Pelao, toda musica tiene su valor..."
Posted by Anthony Dubovsky at 2:21 PM