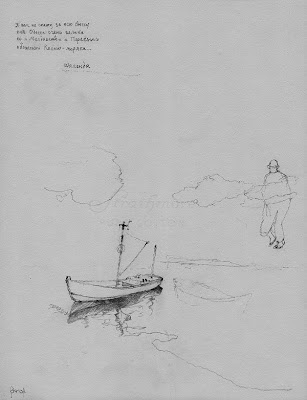 Mark Bernes, his strong face, close cropped Soviet hair, brushed down a little over the forehead. Singing to a Russian woman, blond, just alongside--the camera holds on her impassive face, questioning eyes... Shalandy polnye kefali... The Black Sea skiffs are filled with gray mullet... Much too prosaic in English, where the Russian has all the lilt that arrives with years of inhabiting and enjoying a particular place. Lore of Odessa...the shifting tones...

I won't tell to you about all Odessa
For all of Odessa is surely very grand
But in the Moldavanka and Peresyp'
All adore Kostya the fisherman...

(Shalandy with Mark Bernes singing, 1939)
Posted by Anthony Dubovsky at 11:30 AM