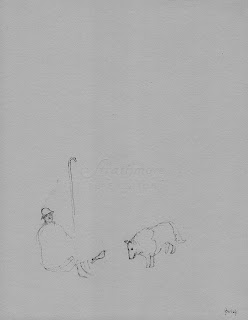 9 October 2007. In between sky, gray to patchy blue, then again to gray. Indian summer, or beginning of the rains. Melancholia, under a pear tree... The lost shepherd--with a hint of Joseph Beuys--his tall crook hidden under heavy felt, wild companion alongside, pacing back and forth, sniffing this European... A reënactment, as in Jamestown, or Plymouth, even...man and the forest--except that now it's by 747 (was that true in Rene Block's day?), and an ambulance careening along the Van Wyck Expressway... Hero or victim, delivered to the stage--an actor, in any case--for history's thing...