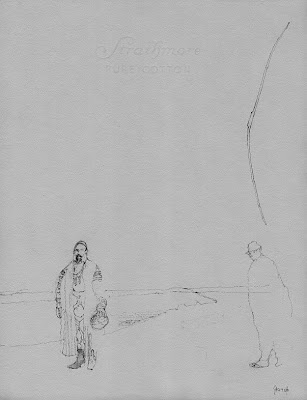 1 March 2010. Moist gray morning air. Unidentified pickup lodged in front of house: small toothpaste tube on corner of dash, acrylic blanket tossed in back, along with some hard-to-read cds. As opposed to small child in wide blue and white striped hood, hand in her mother's, crossing street to Harding school. Morning rites.

On the Banks of the Great Volga, 19th century photographs by Mikhail Bukar'. A Tatar man, dated 1872, from the Saint Petersburg Collection of Russian Nationalities. (Stary vopros: whose Russia, whose nationalities?) Long kaftan with narrow vertical stripes, green and white, black, off-red, strangely homogeneous. His undergarment, a reddish-oxide print, vivid and open shapes. A kind of allegory of space--the containment from without, freedom from within.

Are their Tatar songs the same?
Posted by Anthony Dubovsky at 10:42 AM