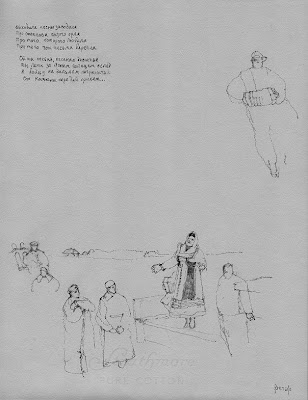 The children of history. Lidiya Ruslanova, here on back of Soviet truck, the year is 1942. Concerts on the front. Her humble beginnings--a village near Saratov, peasant family, a father who died in the war with Japan, childhood in an orphanage. She began singing in the local parish choir, soon a soloist. Then for the soldiers in the Russian Civil War. Extremely popluar during the 1930s, "she was noted for her peculiar singing voice and timbre, which was a revival of old traditions in which female soloists would perform on festive occasions."

Her performances throughout the Second World War, on all the fronts...songs of encouragement to the troops, who revered her. ("Her rough manners and racy language appealed to the soldiers...") She also became "one of the richest women in Soviet Russia," at one point personally financing two katyusha batteries which she then presented to the Red Army. (Soviet reprise of Kutuzov's adjutants purchasing their own uniforms.)

She was arrested in 1950 (her husband's association with Marshall Zhukov, an opponent of Stalin), but Ruslanova refused to sign a declaration that he was guilty. For which she spent years in the gulag, until Stalin's death--at which point (though barely able to walk) "she returned to singing almost immediately..."