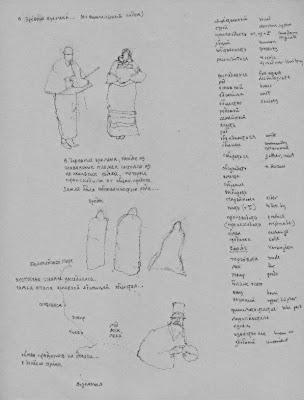 Russian lessons, with misspellings. Misspelling lessons, with some Russian. Book from teacher at Columbia--Leon Stillman--Graded Readings in Russian History. Chteniya po russkoj istorii. New York and Oxford, 1960 and 1990. Walter Benjamin--the only true things one can say about the universe being the place and date of the publication of books.

Benjamin. Thoughts of Kitaj. Photos of him, later years, a refugee in LA. Incongruous, after his "long period of impunity"--the London years. Dark rooms with shelves lined with books. Not quite like the Russian shelves lined with books, though. There in the background in so many photos. Homey shelves, more than scholarly. Books as a life.

Kitaj quoting Robert Lowell: "Nothing is more respectable than a long period of impunity"
Posted by Anthony Dubovsky at 1:35 PM