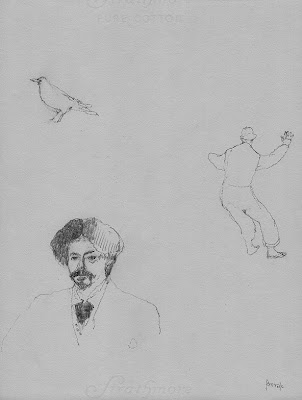 Another go at Repin, Surov's portrait from 1892. Forget it. Yes, Repin was his teacher, but somehow I don't quite believe this kindly face of middle years. Usually warmth in a painting is beguiling, but can it not also be a form of deceit? A covering up? As in the scene from War and Peace, the late-night revel, when Pierre clambers onto the third-floor window ledge, demanding a bottle of rum--if he drinks it, he'll fall, without a doubt--and Anatol Kuragin makes his soto voce aside to their drunken pals, "I'll fool him..."