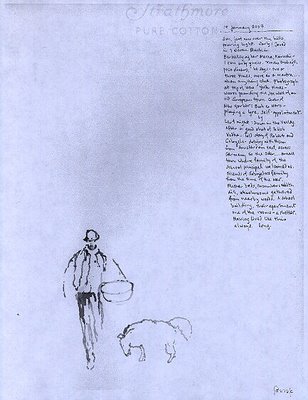 19 January 2007. Sun, just now over the hills, pouring light. Early: Javed in 7-eleven. Back after Mecca, Karachi--I can only guess. "Mucho trabajo, poco dinero," he says, two or three times, more as a mantra than anything else. Photograph at top of New York Times--waves pounding the sea wall of an old European town. Cover of New Yorker: Bush as Nero--playing a lyre, by self-appointment. Last night: Down in the Valley. After a good shot of Polish vodka. Told story of Robert and Gabryela--driving with them from Amsterdam east, across Germany to the Oder...small town where family of the school principal welcomed us. Friends of Gabryela's family from the time of the war. Feather beds, cucumbers with dill, mushrooms gathered from nearby woods. A school building, their apartment one of the rooms--a shelter. Having lived like this always. Song.
Posted by Anthony Dubovsky at 1:53 PM