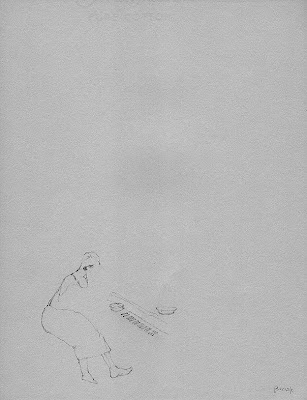 17 April 2007. Milky blue-green pool water, early, hint of sun through windows to the east. Last night: Alyosha impatient, pacing, laps from metal bowl in the dark, then finally to bed. Stories from the south: the taste of salt on her unwashed neck. "I am a good wife." Woman's form at a piano--graceful, bending to impossibly small set of keys. In gloves, even. Like Coco Chanel from 1964. Isabel Ettenauer--a career of toys. Photographed in violent red dress, against background whites and grays--a miniature ebony grand. Another shot, from above, again in place at her tiny black charge. Wires to various recording devices, then a space of polished maple, and a circle of listeners, also on the floor. The appeal of all this--a return to childhood? World free of cares? An island? Österreich--fun to write, so many syllables for a land-locked land. From the south--St. Poelten--also an odd number of syllables. Catholic diocese. Mountains? A lake? As opposed to Sister Rosetta Tharpe. Raw thumb pick runs on a white electric guitar. An off-the-shelf Gibson. Wealth of the world.
Posted by Anthony Dubovsky at 9:58 AM