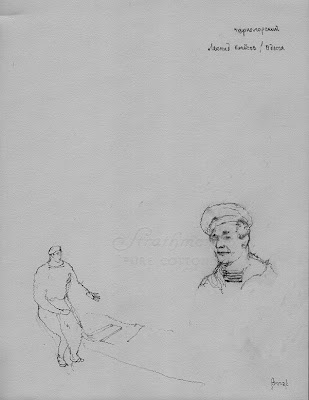 4 January 2010. Early January sun, even earlier than the usual early January sun--and always associated with January 15th, the birthday of my mother, Alice... A warm and beautiful day.

Princess N, by phone: "A Russian year..." Yes, and the voice of Leonid Utesov, holding forth from the Moldavanka. Well, from Leningrad, to be precise. His memories of Odessa--the "ss" pronounced "ts" in the local way. Here as a sailor of middle years, and fitted out raffishly in telnyashka and Red navy cap... Knowing eyes, hint of a smile--a survivor--1895-1982.

The gathering at Klara's. Zoya, now ancient, resting in her small first floor room. Just outside, near the couch, I cue up the songs--Okudzhava, Artur Eisen, Utesov as well... Some of these from the mid-thirties--"Ax, Odessa Moya"--lyrical bounce, but with a certain Jewish plaintiveness...

Zoya, later, to Klara: "I was thinking to myself, where are these songs coming from...?"
Posted by Anthony Dubovsky at 11:51 AM