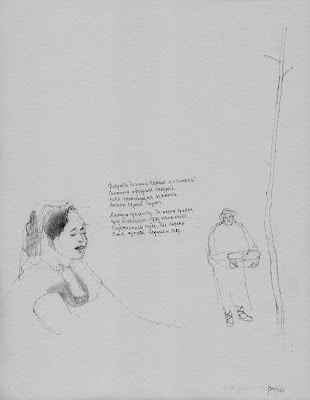 Pasternak reborn on a farm in Tennessee...Bonnaroo, the name from Ninth Ward slang, via Dr. John, as in bon and rue--the best on the street. Street. Poka, words of spring--a black torrent's rush, after black ink of winter. Fevral', self-annihilating absorption of cold... Regina Spektor, "Be afraid of the cold, they'll inherit your blood..." Inherit, not steal--more destiny than crime...

"Be afraid of the old, they'll inherit your souls..."

(Note: Regina Spektor's song, Après Moi, includes a verse from the Pasternak poem, Fevral' (February). In 2007 she performed a live version at the Bonnaroo Music Festival, whose name has New Orleans' roots. She herself was born in Moscow in 1980.
Vesná is Russian for spring--but as a name, it comes from the old Slavic ve + sna--"(awoken) from sleep". The ancient Slavic goddess of spring...a messenger...)
Posted by Anthony Dubovsky at 12:55 PM