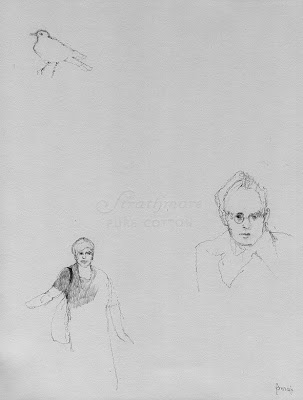 A game with gifts, each wrapped for the Russian New Year, hand-written numbers on paper strips attached. I was 12. Cyrillic shapes revealed in the long serif, the small loop on the two. Klara's hand. Sergey on the couch, holding forth--his alert eyebrow eye catches all--on which a subtle but explosive disquisition-- the theory of the evolutionary structure of the human vertabrae (elaborate back scratcher with wooden rollers), or the Japanese-ness of a Japanese tea (small bag with gen-ma chai)--not a circle, but a picture of father, mother, child. "A different structure within the brain." He unfolds the melody of "Vo pole beryoza stoyala" into a round--hands moving to guide--and soon all the room is singing. Sasha, high wide Russian eyes, his lady Masha, small and charming, with dark curls close to her head, like my mother. Vadim, eyes round with questions, and Natasha, alongside her daughter Ira, all inward, eyes upcast. Young Dara, in the corner, with many questions. And Marianna's delighted but shivery response to a small mechanical frog. Zoya, too, perched attentively in her private high-armed chair...smiling, listening.

Jack: "Like the evenings when I was a boy, with my parents and their friends, all of them sitting together, speaking Russian..."

(Drawing: Isaac Babel, and then his daughter, seventy years later, in California... The bird is a Russian starling...)
Posted by Anthony Dubovsky at 11:28 AM