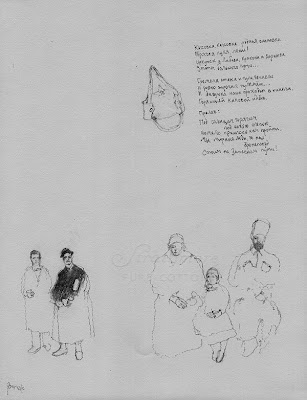 To see a bird, in flight--we were somewhere near Warszawa on the day of Boże Ciało--Corpus Christi--the body of Christ. 1969. Driving west, on the road to Łowicz, with Robert and Gabryela and Blanka--who catches sight of a bird in the sky above. "A good sign, flying in our direction..."

Layers of belief, embedded in each perception. Attached by fine silver wire--almost invisible--the maker unknown. Like the story from Shelley Winters, about Brecht, in Hollywood, in the years during the war. "I'd brought him home to dinner, with my mother, who sometime later asked me about that 'jeweler' who'd paid us a visit. 'Jeweler? I don't remember any jeweler...' 'Well, when you were out of the room, I asked the fellow what he did, and he told me that he made jewels for poor people..."

(A note on the drawing. The two men on the left, Russians, from a city somewhere in the south. The one on the right a seminarian(the coat, the leggings, the shape of his shoes). Heavy lock of hair flopped over his forehead, giving him an even more intense visage. Standing alongside, a companion--maybe from the university--the small mouth, pale face, bow tie. Group to the right--a family from the Caucasus--the mother with folded hands, eyes downturned (strength and severity of inwardness). Her daughter close alongside, leaning in--hands held very much like her mother's. Feet turned inward slightly as well--in some way a repetition of that gesture. The father, with high black Caucasian wool hat, dark face, and a full black beard hiding his mouth. Patient but not resigned. The pockets of his closely buttoned shirt at a precise angle--as with a line of shells. On his waist, a dagger at the ready, just under his left arm. Above--a Budionnovka--the felt hat worn by Budyonny's cavalry. Something right out of Babel...