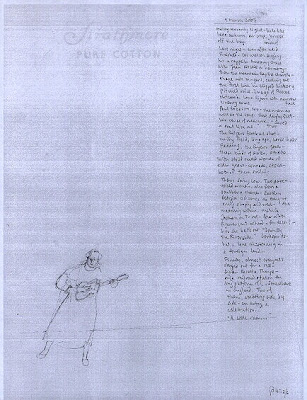 9 March 2007, Friday. Milky morning light--feels like late autumn, air crisp, touch of breeze off the bay. Last night--even after we'd finished--Doc Watson singing his a cappella Amazing Grace, with Jean Ritchie on harmony--then the mountain Baptist church--shape-note singers, someone calling out the first line in a clipped, hickory-pitched voice. Image of Roscoe Holcomb, his lone figure, narrow face, sinewy arms. Paul Robeson, too--the man as well as the song. Slow, deeply felt--his sense of measure. "...that saved like a soul like me." The Rutgers football shot--muddy field, long ago, leather helmets, horse hair padding. The Emperor Jones, those kinds of roles. Othello. With stolid woman of elder years--a comrade, CPUSA--both of them smiling. Then: Swing Low. Two pure-voiced women, also from a southern church--this time East Georgia. Folkways recording. Old songs as they're sung, simply and well--the meaning within. Mahalia Jackson on tv set--four white figures just behind--for decor?--as she belts out "Down by the Riverside." Good spirits--but a lone missionary in a foreign land. Finally, almost everyone's stepped out for a rest--Sister Rosetta Tharpe--on the long platform of a railway station, somewhere in England. Two of them, strutting side by side--an entry, a celebration. "A little rain..."
Posted by Anthony Dubovsky at 10:27 AM