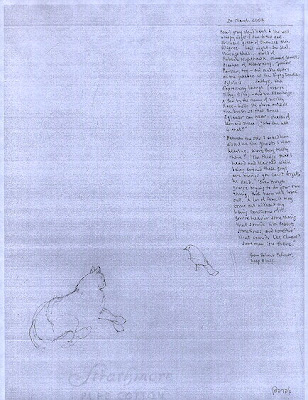 20 March 2007, Monday. Pearl gray cloud bank to the west, whispy edges of sun to the east. Brilliant green of Chinese elm, filigree. Last night: Son Seal, Chicago Blues...world of Robert Nighthawk, Elmore James, flashes of Albert King, Junior Parker, too--and Muddy Waters on the jukebox at the Dipsy Doodle. Sylvio's, Smitty's, the Expressway Lounge (over on Fifty-fifth)--and the Flamingo. A fan by the name of Wesley Race--holds the phone outside the booth so that Bruce Iglauer can hear. "Who the hell is that?" Shades of Leonard Chess.

From Robert Palmer, Deep Blues: "Between the sets I asked him about all the ghosts I was hearing. Were they really there? "The things that I heard and learned while being around those guys are things you can't forget,' he said. 'Even though you're tryin' to do your own thing, that basis will come out. A lot of time it may come out without your being conscious of it. You're hearin' somethin' that sounds like Robert sometimes, and somethin' that sounds like Elmore? Sure man, it's there.'"
Posted by Anthony Dubovsky at 11:07 AM