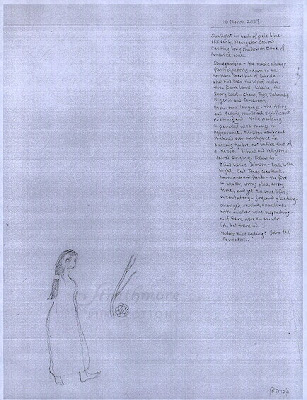 16 March 2007. Sunlight in wash of pale blue--still early, Navigator Escrow casting long shadow on Bank of America wall. Senegambia--the music always participatory--down to the northern coastline of Guinea...what had been the Wolof realm, then Sierra Leone, Liberia, the Ivory Coast--Ghana, Togo, Dahomey. Nigeria and Cameroon. Pitch-tone language--the rising and falling sounds, distinct and significant. Voice masking in parallel with change in appearance. Mirliton membrane drawn over the mouthpiece-- "a buzzing timbre, not unlike that of the kazoo." Ritual and religion, sacred singing. Follow to Blind Willie Johnson, Dark Is the Night. East Texas coastline, hurricanes and floods--the fire in winter, wrong place, wrong time, and yet the voice lifts, incantatory--joy and pleading--charged, resolute, sometimes with another responding--as if there were an answer (oh, but there is).

"Who's that calling? John the Revelator..."
Posted by Anthony Dubovsky at 10:42 AM