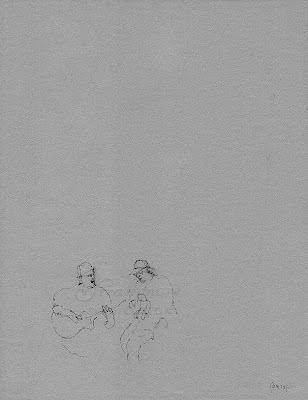 8 June 2008. Gray sky, touch of sun now from just over the hills. Blustery man in blue-black vest, tossled hair--Scottish highlands--making his way across Solano on the diagonal, worn leather knife case at his side. Last week: morning sun, two figures with guitars, in front of the old Commons. Felt hats and Yamahas--mountain retreat. Songs fifty years old? Right out the window--it's all rock and roll. Hank Williams, maybe--something lyrical? Takes encouraging--to get through the strum-o-phile veneer. A culture of consumption--re-purveyed. That's where we're at. But the songs themselves--where do they come from?