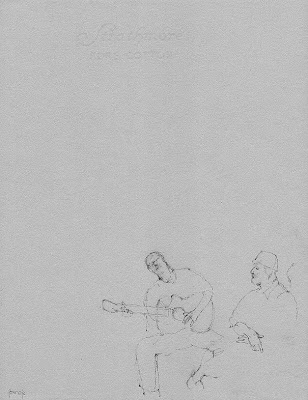 12 June 2007. Golden light raking the south wall of the pool, ripples and shimmers. Two dark flip flops, askew, on wet tile. Racing turns in the deep end. Portland, Sunday morning...the wide lawn at Reed. Mike Russo's stories--Candy's brought him over--his tours with Lightning Hopkins, up and down the West Coast, Brownie McGhee, too. Got his start in Gresham, a few miles to the east. Last played in 1980, he tells me, with Brownie McGhee. More recently--hard times. "But I still have my thumb and finger picks in my pocket." And he did, too--taking up my guitar, launching into an inimitable version of "The Fireman," bass runs right out of the blues, figures up the neck, too, solid, emphatic--the kind of playing where detail never outweighs the song itself.

You wonder how he got there--so strong, simple, direct. Like the old guys, even with some missed notes. "It's all country...," he tells me. "But you know, I learned even more from them during the times in between the songs..."
Posted by Anthony Dubovsky at 9:08 AM