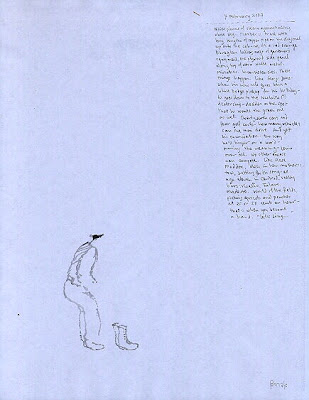 6 February 2007. White plume of steam against milky white sky. Plumber's truck with long lengths of copper pipe on the diagonal up onto the cab--no, it's a red-orange fiberglass ladder, maze of gardener's equipment, one plywood side pane along top of worn white metal. Mistakes. Inconsistencies. These things happen. Like George Jones , when his new wife gives him a white Dodge pickup for his birthday--he goes down to the Nashville(?) dealership, decides on the spot that he wants the green one as well. Twenty seven cars and four golf carts--how many vehicles can a man drive? And yet, his enunciation--the way he'll linger on a word--mining the meaning--wins over all. No other excess can compete. Like Rose Maddox, close in her mother's tow, belting forth songs at age eleven in Central Valley bars--Visalia, Tulare, Modesto. World of the fields, picking apricots and peaches at 25 or 50 cents an hour--that's when you become a band. "Let's sing..."
Posted by Anthony Dubovsky at 11:48 AM