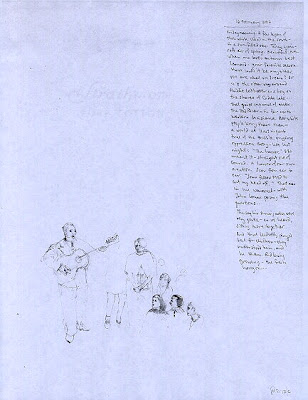 16 February 2007. Friday morning. A few layers of thin white cloud in the south--in sun-filled sky. Today, again--soft air of spring. Beautiful, even when one loves autumn best. Leonard--your favorite season. How could it be any other. We are what we dream? Or is it the other way around. Huddie Ledbetter as a boy, on the shores of Caddo Lake...that quiet expanse of water--the Red River--in far north-western Louisiana. No white people living there then-a world at least in part free of the terrible, on-going oppression. Betsy--late last night: "The horror." she meant it--straight out of Conrad. A horror of our own creation. Scar from ear to ear. "Some fellow tried to cut my head off." That was in the newsreel--with John Lomax posing the questions... They say his tuning notes were very gentle--as we heard, sitting there together. And that Leadbelly played best for children--they understood him. And he them. Endlessly growing--the fresh horizon... 2.44
Posted by Anthony Dubovsky at 4:11 PM